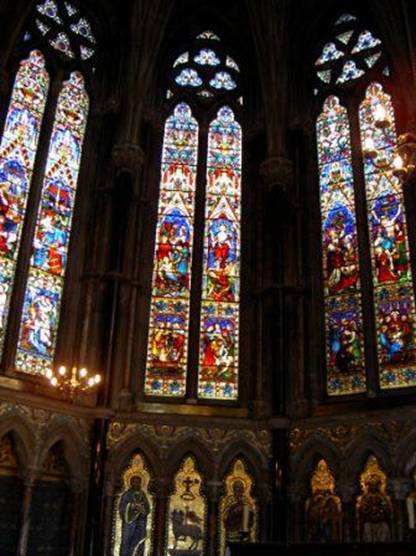 Thomas Blackmore Colenso was born on in Devonport. He was christened at the Princes Street Independent Chapel early in July of the same year. Along with his brother and sisters he was christened again into the Church of England in St Austell in 1825.

His brother John William was a Master of Mathematics at between 1839 and the end of 1841. Thomas attended this school between 1840 and 1842. He was the Head of the School and the Lyon Scholar in 1842. From Harrow he followed his brother to Cambridge, but migrated to Trinity College, Oxford. After graduating with a B.A. he became a fellow of Exeter College between 1846 and 1849.Tragically he died of tuberculosis on 28th September 1849 at Lostwithiel, aged 26.

There is a window in the Exeter College Chapel, built about 1853, dedicated to his memory. The brass plate below the window is inscribed with:

William Hichens, was also a fellow of the College, who died of typhoid on the 17th August 1850 while the curate of St Feock. His father Robert Hichens, one of the founders of the stockbroking firm Hichens, Harrison and Company, was also descended from a family long associated with the St Ives fishing industry.

In “The Life of John William Colenso, DD, Bishop of Natal” Sir George Cox published a letter written by John William to the Reverend Thomas Henry Steel describing the death of his brother. Rev. Steel was an assistant master at Harrow between 1836 and 1843. He probably taught TBC.

I never saw my dear brother during his last illness: and this is my greatest source of grief. He returned from in June, apparently quite refreshed and revived, having had a most pleasant ramble in . After parting from his pupil (the Duke of Bucceleuch’s son), he came to visit us and spent a very pleasant week in Fornett, then went into Cornwall to spend a fortnight with his father, and returned on his way eastward to pay another visit. He wrote me a line, however, upon his way to say that he was detained at Exeter by an attack of hemorrhage, of which he made so light a matter that we entertained no serious apprehensions about him, till his sister called to see him on her way down, and found that he was worst than we feared, and, as soon as could be, carried him home to his father at Lostwithiel. Here he seem to rally and one day took a walk of a mile; but that night my sister, while writing after all were in bed, heard him coughing a good deal, and after waiting some time went up to see how he was, and found him on his knees with a bason before him half full of blood. From that time on he began to sink under all the usual signs of consumption……..

I was at Lostwithiel on Monday, at , but too late to look upon his face again. So that I have now only the recollection of his cheerful calm face in life and apparent health; he seems but to have gone to some far-off land, to be absent for a season.

It does not seem that he really anticipated so speedy a removal until the very last day. About evening he asked the surgeon if the sound he heard in breathing was from the tubercles, or from water in the chest. Being told ‘perhaps from both causes,’ ‘Then’ he said, speaking in a loud full voice, such as he never used in all his illness, ‘there is no more hope for me in this world,’ and calling for his father and sister Sophie, he bade them ‘Good-bye,’ repeating again and again ‘I am going to my glorious rest’. After this delirium came on him for about six hours, and then he sank into a quiet sleep from which he never woke again, his passing into eternity being so gentle that none could mark the moment of his last breath.

Altogether we have most abundant comfort in our bereavement. His peculiar form of illness, by the rupture of blood vessels, prevented his speaking much, till those last few hours, when he spoke loudly and incessantly; but it was plain he was gently reposing all the while his head upon the very bosom of his Lord, and so fell asleep in Jesus. If we wanted confirmation of that which his whole life had been teaching us, it was to be abundantly supplied by his private papers and journals, which show how for many years past he had been living a life of faith in the Son of God and hungering and thirsting after righteousness …..

You have asked me to tell you something of his last hours, and I have done it, I fear at too great a length; but indeed it is pleasant to think and write of him, and you, I am sure, will permit me this consolation.