Samuel May Colenso married Mary Veale Thomas in on . She was the daughter of William Thomas, a solicitor in . Her mother was Jane Veale, connected to the Veale Family of Trevaylor, near Gulval.

Samuel was described as a gentleman in the marriage record, but elsewhere as saddler. His business must have been reasonably successful as he served some time as a councilor for . He is also recorded as joining the Druid’s Lodge on . This is the first record indicating the Colenso family’s long association with Freemasonry.

Samuel and Mary had ten children, with nine reaching adulthood.

William, born , dying in Napier New . He emigrated to in 1834 as a printer for the Church Mission Society. He was an explorer, naturalist, politician and student of maori-lore, collecting most of the NZ flora for the .  He had two children by his wife Elizabeth Fairburn, and another son Wiremu as the result of a relationship with a maori woman called Ripeka.

Samuel, born 1813. He married Louisa Charles and had three daughters. After his wife’s death in 1852, he and his two surviving daughters disappear. However the will of Eleanor Thompson Brock Colenso, indicates that she married a Samuel Colenso around 1857 in . He subsequently disappeared again, with the only clue an unclaimed letter in around 1862. Samuel was a painter and glazier.

Richard Veale Thomas, born , dying in . He married Susan Ann Edmondes, from Marazion,  in 1836 and they had 19 children. He was also a painter and probably started the Colenso & Sons business of painters and decorators.

John Williams, born 1818, dying in . He married Christiana Grey in 1847, but they had no children. He was a painter until his marriage, and then became a grocer. His death was attributed to epilepsy.

Jane Emily, born 1820, dying January 1896 in . She married John Montmorency Tucker in Paddington in 1848. In the 1881 census she is widowed and running a boarding house in . In the 1891 census she is living as a lodger in . A number of letters from her brother William to his nephew William indicate that he was supporting her.

Elizabeth Frances, born 1822, dying in . She married John Bramwell Sutherland Stevens, a master mariner. They had one daughter Mary Jane (Minnie), who was buried in with her parents in 1937, no indication that she married.

Edwin, born 1827, dying in . He immigrated to in 1848 and worked as a carpenter and then an undertaker. He married twice and had 15 children.

Mary Ann, born 1830. She married James Symons, a saddler from Liskeard, in 1856 in . He ran a wholesale saddlery business in . They had 6 children, including Annie Colenso Symons and Edward William Symons, who both became teachers, with the latter becoming Headmaster of the , .

Samuel May and his wife were married in the established church and their first two sons were christened in the , - St Mary’s. However there are no further christenings recorded and they were both mentioned on a memorial at the Heamoor Wesleyan Chapel. This suggests that they became Wesleyan. Samuel’s brother William was a lay preacher and actively involved in the Wesleyan movement.

They lived at for most of their married life – a house that had been in the Colenso family for many years. Mary Veale Thomas died in November 1856, with Samuel May dying in April 1866.

Their portraits were taken by their son William to and then returned to , via his nephew William Colenso, son of Richard Veale Thomas. The following is an extract from a letter, dated 5th June 1898, William wrote to his nephew concerning the portraits. This link will take you to a description of William’s early influences before going to New Zealand. 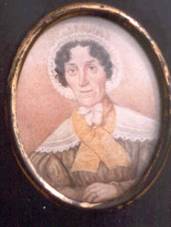 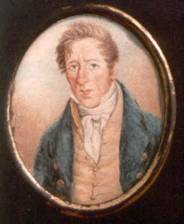 The original portraits are now at Shotley Manor, passed down through Susan Colenso, daughter of William’s nephew, who married Albert Arthur Greer Martell.

The first family tree that I saw described Samuel as “the bad old man”. Have never found any explanation for this title.